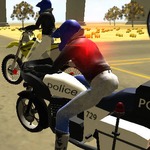 3D Moto Simulator 2 is an awesome and fast-paced motorbike racing game in which you can test your driving skills on a series of cool cross and trials bikes. Choose your motorbike and then jump on and enter the map! Different bikes available include cross bikes, trials bikes, or even a powerful police bike!

There is also three different locations to choose from – a city located in a mountainous desert, a sprawling city complex and a barren wasteland. Why not try all three and take as much time as you want to explore and to show off your racing skills?

This game was initially released in October 2016. You can find the original version at http://www.friv4school2021.net/. This updated version was released in January 2021.

3D Moto Simulator 2 is made by Mohamad A, who also made other great driving games such as CARGO DRIVE and MOTO TRIALS OFFROAD 2.

This game is a web browser game.