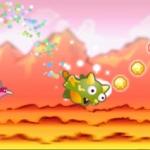 You need escape from the fiery lava and avoid fleeing birds to fly as far as you can - collecting gems on the way .Flee the erupting volcano and avoid hitting birds! Find bonus letters to trigger a dash and collect as many gems as you can!

It's playable in browsers such as safari and chrome and can play the game "Dragon Dash "  on smartphone and tablet (iPhone, iPad, Samsung, Android devices and Windows Phone) .

Don’t hesitate anymore! Try play other the friv games more with Panic Drop & Valto on http://www.friv4school2021.net/  .Have a great time!