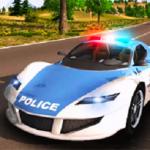 Did you like playing Offroad Police Cargo Transport? Then take a look at our other car games such as Finger Driver & Free Rally at http://www.friv4school2021.net/

Use the WASD or arrow keys to drive.