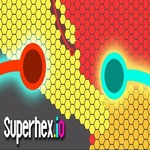 superhex.io is an online HTML5 game for mobile free on friv games 2021.

Superhex.io! The hit game comes to mobile! Play online with millions of players and try to create the biggest hexagons territory!
Your goal? Conquer as much territory as possible, don't get hit, defend your land and try to find the best strategy to conquer all the map, but be careful other players won't let you do so.
After the success of Superhex.io on browser, Tekko Studios offers a new and fun experience of the game on mobile with new controls perfect for touchscreens! Find the addictive gameplay, multiplayer and unique design on an io game that millions have already enjoyed on PC.

Despite Superhex.io's seemingly simple gameplay, you will find yourself playing over and over again! This IO game has a simple concept - conquer territory using your moving snake. To make a territory you must move your hex snake to an empty region and create a complete ring - do not touch your own line however as this will kill you! Think carefully and stay within your boundaries to protect your territory and stop invaders.

Enemy hex snakes can eliminate you from the game by simply touching your line so watch out when attempting to conquer other player's regions. Try capturing small pieces of territory often instead of trying to create huge rings - the further you stray from your territory, the greater the chance you have of being intercepted and destroyed! How far will your empire expand? Will you conquer the hex board?

Tekko Studios made this game.

Your snake moves automatically. Contros the direction with your mouse.